Digital Equipment Corporation, also known as DEC and using the trademark Digital, was a major American company in the computer industry from the 1960s to the 1990s. It was a leading vendor of computer systems, including computers, software, and peripherals, and its PDP and successor VAX products were the most successful of all minicomputers in terms of sales.

The PDP-11 architecture is an instruction set architecture by DEC. It is implemented by CPUs and microprocessors used in minicomputers of the same name. It was in wide use during the 1970s, but was eventually replaced by the more powerful VAX-11 architecture in the 1980s.

The J-11 is a microprocessor chip set that implements the PDP-11 ISA jointly developed by DEC and Harris Semiconductor. It was a high-end chip set designed to integrate the performance and features of the PDP-11/70 onto a handful of chips. It was used in the PDP-11/73, PDP-11/83 and Professional 380.

The LSI-11 (PDP-11/03), introduced in February 1975 was the first PDP-11 model produced using large-scale integration; the entire CPU was contained on four LSI chips made by Western Digital.

The 1801 series CPUs were a family of 16-bit Soviet microprocessors based on the indigenous Elektronika NC microarchitecture cores, but binary compatible with DEC's PDP-11 machines. 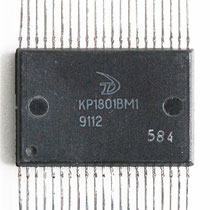 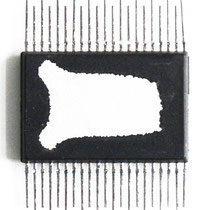 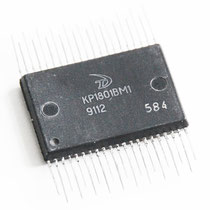 Kindly donated by Pavel A. Zagrebin.

Alpha, originally known as Alpha AXP, is a 64-bit RISC instruction set developed by DEC, designed to replace their 32-bit VAX CISC instruction set. Alpha was implemented in microprocessors originally developed and fabricated by DEC. These microprocessors were most prominently used in a variety of DEC workstations and servers, which eventually formed the basis for almost all of their mid-to-upper-scale lineup. Several third-party vendors also produced Alpha systems, including PC form factor motherboards.

The 21164 continued the performance lead from the 275 MHz Alpha 21064A until the introduction of the Intel Pentium Pro in November 1995, when a 200 MHz version outperformed the 300 MHz 21164. The 21164 retained its floating-point performance lead. The 333 MHz 21164 introduce the following year outperformed the Pentium Pro, but it was later surpassed by the MIPS Technologies R10000 and then by the Hewlett-Packard PA-8000 in the same year. 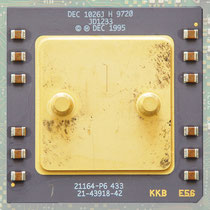 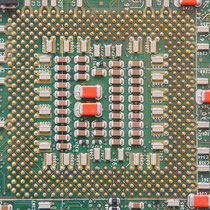 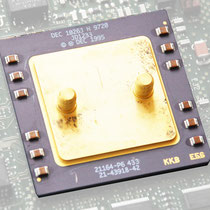