PowerPC (an acronym for Performance Optimization With Enhanced RISC - Performance Computing, sometimes abbreviated as PPC) is a RISC instruction set architecture created by the 1991 Apple-IBM-Motorola alliance, known as AIM. PowerPC, as an evolving instruction set.

Originally intended for personal computers, PowerPC CPUs have since become popular as embedded and high-performance processors.

Switch to the die photography page!

The PowerPC 604e was introduced in July 1996. It had 5.1 million transistors and was manufactured by IBM and Motorola on a 0.35 µm CMOS process with five levels of interconnect. The die was 148 mm² or 96 mm² large, manufactured by Motorola and IBM respectively, drawing 16-18 W at 233 MHz. It operated at speeds between 166 and 233 MHz and supported a memory bus up to 66 MHz. 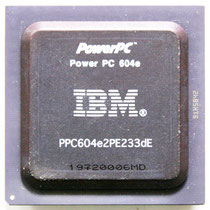 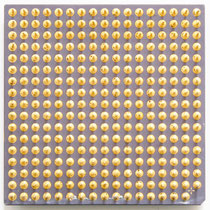 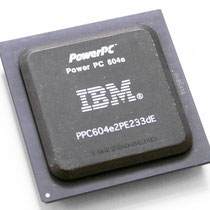 The PowerPC 7xx is a family of third generation 32-bit PowerPC microprocessors designed and manufactured by IBM and Motorola (now Freescale Semiconductor). This family is called the PowerPC G3 by its well-known customer Apple Inc, which introduced it on November 10, 1997. The term "PowerPC G3" is often, and incorrectly, imagined to be a microprocessor when in fact a number of microprocessors from different vendors have been used. Such designations were applied to Apple Macintosh computers such as the PowerBook G3, the multicolored iMacs, iBooks and several desktops, including both the Beige and Blue and White Power Macintosh G3s. The low power requirements and small size made the processors ideal for laptops and the name lived out its last days at Apple in the iBook.