The original Intersil was founded in 1967. When microprocessors emerged to the market in the 1970s, Intersil participated with its 12-bit IM6100, which was the first microprocessor produced in CMOS technology and emulated the PDP-8 instruction set. In 1988 Intersil was taken over by Harris Semiconductor, which had offered the IM6100 as second source.


Monolithic Memories, Inc. produced bipolar PROMs, programmable logic devices, and logic circuits.
MMI was founded in 1969 by former Fairchild Semiconductor engineer Ze'ev Drori, later the President and CEO of Tesla Motors. In 1987, under the stewardship of President Irwin Federman, it was merged with AMD in a $442 million stock swap to become the world's largest IC manufacturer.

The 320xx or NS32000 was a series of microprocessors from National Semiconductor. They were likely the first 32-bit general-purpose microprocessors on the market, but due to a number of factors never managed to become a major player. The 320xx series was also used as the basis of the Swordfish microcontroller. It was replaced by the CompactRISC architecture in mid-1990. 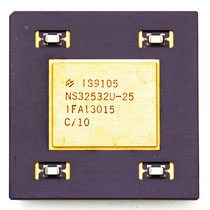 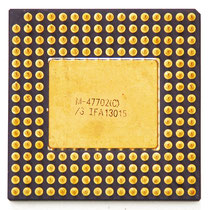 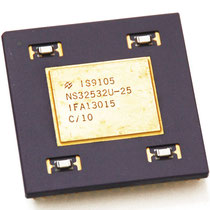 
Signetics was the first electronics manufacturer specifically established to make ICs. Founded in 1961, they went on to develop a number of early microprocessors and support chips. They were bought by Philips in 1975 and incorporated in Philips Semiconductors

The 8X300 is a microprocessor produced and marketed by Signetics starting 1976 as a second source for the SMS 300 by Scientific Micro Systems, Inc. Although SMS developed the SMS 300 / 8X300 products, Signetics was the sole manufacturer of this product line. In 1978 Signetics purchased the rights to the SMS300 series and renamed the SMS300 to 8X300.

It was designed to be a fast microcontroller and signal processor, and because of this differs considerably from conventional NMOS logic microprocessors of the time.

Kindly donated by Pavel A. Zagrebin.